John Glen, then Britain’s minister for Arts, Heritage and Tourism, announced the agreement which will see representatives of both UNESCO sites explore the challenges and opportunities of managing large and complex archaeological remains, and to examine the potential tourism growth in both countries.

“The Wall to Wall Collaboration is the perfect example of how heritage can be used to strengthen international partnerships, grow tourism and build a truly global Britain,” said Glen.

The agreement is the first of its kind and was instigated by the Chair of the Hadrian’s Wall World Heritage Site Partnership Board and World Heritage UK member Humphrey Welfare.  Talks took place during a high-level meeting in Beijing between British and Chinese heritage experts in February 2017, led by the British Council. 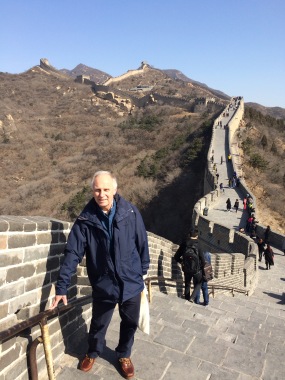 Humphrey said ‘The two Walls are very different in many ways, but we have much in common and can learn a great deal from each other. The enthusiasm, friendliness and professionalism of our Chinese colleagues have been inspiring and hugely enjoyable: a terrific example of UNESCO values in practice.’

Historic England and the Chinese Academy of Cultural Heritage signed an official agreement on December 7th 2017, the first actions of which will be a professional seminar to be held in Newcastle in March 2018. This will focus on the conservation of the Walls and the impact of visitors; it is the first step in a wider programme of collaboration between the two Sites which will also encompass exhibitions, lectures, technical discussions and educational exchanges.