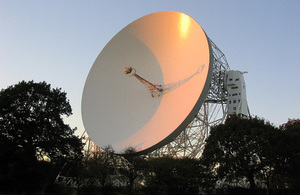 The Observatory, part of the University of Manchester, is home to the Grade I Listed Lovell Telescope and is a site of global importance in the history of radio astronomy.

Founded in 1945, it is the earliest radio astronomy observatory in the world still in existence and pioneered the exploration of the universe using radio waves.

The UK currently has 31 World Heritage Sites, with The Lake District having been inscribed in 2017.

In order to be inscribed as a World Heritage Site, nominations must show that they possess Outstanding Universal Value, which transcends borders.

The nomination will now be formally assessed by the International Council of Sites and Monuments before the World Heritage Committee decides whether it will join the likes of The Great Barrier Reef, the Taj Mahal and the Great Wall of China as a designated World Heritage Site.

Jodrell Bank is the only site in the world that includes evidence of every stage of the post-1945 development of radio astronomy. As well as the Lovell Telescope, it also includes the Grade I Listed Mark II Telescope and the Park Royal building, which was the control room for the Transit Telescope, whose detection of radio waves from the Andromeda Galaxy confirmed that the Universe extends beyond our own galaxy.

“Jodrell Bank played a central role in transforming our understanding of the Universe and is therefore a site of global importance.

“The nomination process for UNESCO is rightly thorough but I believe Jodrell Bank deserves to be recognised.

“The diverse heritage of the UK is world renowned and the observatory would be a worthy addition to our list of World Heritage Sites.”

“The Jodrell Bank Observatory, and Lovell Telescope in particular, have become icons of science and engineering around the world and we’re delighted to reach this milestone. We have been preparing the case for nomination for inclusion of Jodrell Bank on the World Heritage list for several years now and we look forward to showcasing its rich scientific heritage on the international stage.”

“Jodrell Bank really is an iconic site and institution, not just here in the northwest of England but to people around the world.

“It is the one remaining site, worldwide which has been a working observatory from the very first days of radio astronomy to the present day. It’s important that we protect its rich heritage as we celebrate its current and future work.”

John Glen, then Britain’s minister for Arts, Heritage and Tourism, announced the agreement which will see representatives of both UNESCO sites explore the challenges and opportunities of managing large and complex archaeological remains, and to examine the potential tourism growth in both countries.

“The Wall to Wall Collaboration is the perfect example of how heritage can be used to strengthen international partnerships, grow tourism and build a truly global Britain,” said Glen.

The agreement is the first of its kind and was instigated by the Chair of the Hadrian’s Wall World Heritage Site Partnership Board and World Heritage UK member Humphrey Welfare.  Talks took place during a high-level meeting in Beijing between British and Chinese heritage experts in February 2017, led by the British Council.

Humphrey said ‘The two Walls are very different in many ways, but we have much in common and can learn a great deal from each other. The enthusiasm, friendliness and professionalism of our Chinese colleagues have been inspiring and hugely enjoyable: a terrific example of UNESCO values in practice.’

Historic England and the Chinese Academy of Cultural Heritage signed an official agreement on December 7th 2017, the first actions of which will be a professional seminar to be held in Newcastle in March 2018. This will focus on the conservation of the Walls and the impact of visitors; it is the first step in a wider programme of collaboration between the two Sites which will also encompass exhibitions, lectures, technical discussions and educational exchanges.

Details are being finalised but this World Heritage UK workshop ‘Commercial Best Practice in World Heritage’ is not to be missed! It will include speaker experts from the top of their professional game and some unique behind-the-scenes experiences not available to the visiting public at the Kew Gardens UNESCO World Heritage Site.

Ticket booking and outline programme details are available at https://www.eventbrite.co.uk/e/world-heritage-uk-workshop-commercial-best-practice-in-world-heritage-tickets-42086363446

More details on the programme will be circulated shortly.

Advance booking is essential as only 50 places are available for the workshop sessions and behind the scenes tours. Please be advised that 33% of the places available for this workshop have been snapped up already so if you or your colleagues do intend to come to the Kew Gardens workshop you are advised to secure your place as soon as possible or you may be disappointed.

Please do share this message with relevant colleagues and networks.

After a very successful and challenging 2017 season of lectures on the theme of Heritage at Risk, we are now returning closer to home, to look at the setting in which our World Heritage Site sits. Please join us to find out how the landscape around us forms an integral part of what makes us a World Heritage Site.

Here is a calendar with some provisional dates for the early part of 2018: